Have now been thanked in 3 published books. New life plan: don't try to accomplish anything, just be friends with talented people 😉

Do you remember when I posted about my friend Laura Stone and her wonderful book The Bones of You? This time I’m proud to introduce you to another one of my talented friends, Victoria Denault. I can’t even remember how many years I’ve known Victoria, but I know it’s more than I can count on my fingers. Victoria is fabulously talented and has started publishing romance novels. (Bad Jen for not posting about this sooner!)

If you’re like me, you’re a little hesitant when it comes to novels about romance. Too many of them tell stories where all a woman needs to find true happiness is a man to acknowledge that she has worth. Or sometimes all a man needs to overcome massive commitment issues is a woman good enough for him. Gag. (Honey, if he’s scared of commitment he’s not going to invest in the relationship no matter how “good” you are, and if you can’t find happiness inside yourself no man is going to be able to give it to you!) But I’m getting off topic… The stories Victoria tells are not that at all. Don’t let the classic cheesy romance novel covers fool you, Victoria’s characters feel like real people. Real people who, like most of us, are trying to successfully navigate this often frustrating thing called ‘life.’ Ideally with a best friend/lover/companion by our side.

(Click image to go to Victoria’s author page on Amazon)

You can read an excerpt from One More Shot here. The second book in the trilogy, Making a Play, was just released. Excerpt here. Look for the final installment, The Final Move, in December of this year.

Pre-order The Final Move on Amazon.

Victoria Denault loves long walks on the beach, cinnamon dolce lattes and writing angst-filled romance. She lives in LA but grew up in Montreal, which is why she is fluent in English, French and hockey.

Still not convinced? Here are One More Shot reviews from around the web:

Overall this was a really fabulous read and I must say I was shocked how well written it was for it being the debut novel for this author. It is a beautifully written story that is sweet and funny, it’s hot and very sexy but it’s also at times it has just the right amount of drama. Jessie and Jordan’s story was a really great and I immediately felt the connection they shared and the chemistry between them when they got together was electric. This was my first read by the author but it definitely won’t be my last and I will be adding her to my list of authors to keep an eye on for sure.
BethyMac76 on Amazon

One More Shot is the first book I have read by Victoria Denault, and as a debut novel it was a pretty stellar start to the Hometown Players series. … This is a book that jumps back to Jordan and Jessie as teenagers and for the first 50% or so the story is giving you the reasons as to why they have spent the last 6 years apart, and the beginnings of their reconnection. It was well paced; the developments and revelations from them both were spaced perfectly. … I often get to a point where the drama being added to drama just for the sake of more drama just bores me. Victoria worked the drama and angst between this couple perfectly, I felt a little frustration, a little empathy, and understood where both of them were coming from at points, I think the dual POV gave the depth to them, as you were given their reasons for what they did in the past, as well as their motivations for everything that went down with them as the story moved on.
Miss Claire L. Robinson on Amazon

I love second chance romances!!! One More Shot was a great combination of sweet, angst, steam and still managed to pull on my heartstrings. It was the first book in a new series and I have to say I cannot wait for the second book (about another couple coming out Sept. 2015)!! I loved Jordan and Jessie and really hope will get more of them in future books :). Steph and I both agree One More Shot is a 4.5 star book and want to thank Victoria Denault for introducing us to the town and people of Silver Bay!
Stephanie and Christin’s Reviews on Good Reads

I fell in love with this story very early on. … I really enjoyed this book more than I expected to and would recommend it to anyone who loves a good semi-steamy, super sexy, second chance romance.
Jaime Fiction Fangirl’s Reviews on Good Reads

Today was awesome. I did a lot more standing/walking than was smart and boy am I feeling it now, but I had so much fun that I regret nothing! Friends made time in their busy schedules to take me to an art show I wanted to see and out to a favorite restaurant that sent me a free birthday coupon. It wasn’t the flashiest or most glamorous of days, but in terms of friendship and enjoyment it couldn’t be beat. 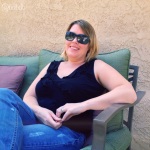 My chauffeur for the day… 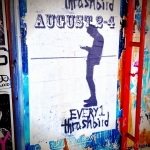 Oh look, just what we were going to see! 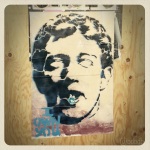 The art show was something I found out about through Instagram. A lot of great street art goes up in my neighborhood and over time I’ve found certain artists that I really enjoy. The internet and social media allows me to find them and keep track of what else they do. This particular artist goes by the name Thrashbird.

I had very little information going in to this so I wasn’t sure what to expect, but what I found was simply wonderful. The art was a mixture of images I was familiar with and things that were new to me. Best of all (and totally unexpected!) the artist was there and took the time to talk to us, share future plans, further educate us, and answer my silly questions. What a sweetheart!

Here are some low quality cell phone pics of the (most definitely high quality) art:

I love this piece!

I think this one might be my favorite. (I keep changing my mind about which one I like most though.)

In the alternate universe where I am wealthy I would have bought more than one of the pieces we saw today. In this universe though I am just grateful to the friends who made it possible for me to have this experience. I’ll spend the next few days taking it easy to recover. Totally worth it! 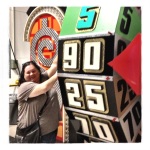 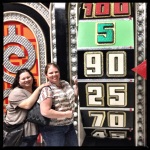 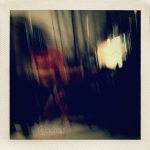 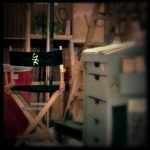