Catch up on previous weeks here 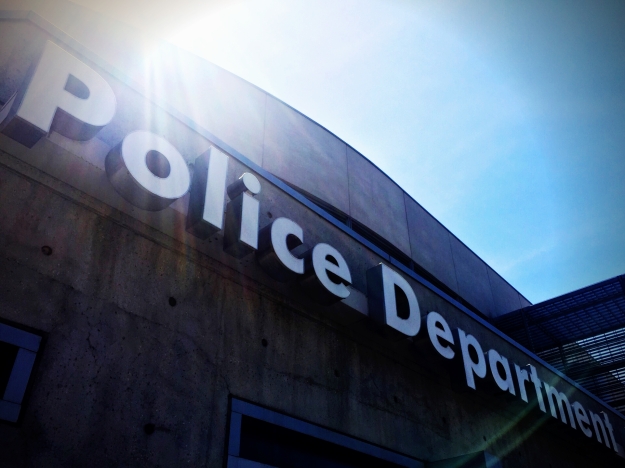 Before we get into what I learned this week I want to introduce you to Suzie, who is in charge of our class and probably a lot of other things at the police department.

What I wrote under “additional comments” is a pretty typical smart-alec-y comment for me, but don’t let that make you think it’s not 100% true. (Suzie is the same Suzie I made a cryptic mention of in Week 4’s post as the “Mom” of the Explorers, which makes perfect sense if you’ve ever met her.) I’ve mentioned a few times how the unstructured parts of the curriculum are sometimes the most interesting and how just ‘chatting’ with some of the officers is my favorite part. Well that holds true for Suzie, except times a jillion. Suzie keeps the class on track, (even the officers) never tells me how annoying I am, (which is a perfectly valid response to spending time with me) and is always ready with some tidbit about law enforcement in general, the SMPD in particular, or just some random fascinating factoid. (About the windows in the dispatch center, training an officer, etc…) It’s the exact stuff that makes the class not just interesting, but fun.

Suzie really could teach the class all by herself. And it’s awfully nice of her to let the officers play. I stand by my comment.

The first part of class was devoted to learning about the department’s scruffiest officers. I don’t mean the kind who overslept and didn’t have time to shave before work, I’m talking about the K-9 variety. Santa Monica PD has 3 police dogs: Felix, Boris, and Rambo. (We’ll talk more about them later.) All three dogs come from the Czech Republic and “speak” Czeck. SMPD gets them from a vendor, Alderhorst Police K-9, who gets them over in Europe and provides dogs to most of the law enforcement agencies around here. Dog shows are different in Europe, instead of breeding for looks they are bred for skill, and dog shows are where they shine. All of SMPD’s K-9 officers are “titled.” (Which makes them sound like Dukes or Earls or something, and now I want an all dog version of Downton Abbey to exist.)

Now I would like to introduce you to my 3 favorite Santa Monica Police Officers (no disrespect to any of the other cops I’ve met, but c’mon, they’re police puppies!!! Other officers never stood a chance with me.)

Boris, Rambo, and Felix are all total sweethearts. I know they mean business and I’m sure they are scary when they need to be, but they were all such love bugs that it’s hard to picture them being anything but affectionate. I fawned all over them (as did the whole class I think) but Boris stole my heart. Felix tried to bite my ring off my finger which made me laugh because, well, if I could get away with biting jewelry off people I would. Rambo seemed totally chill, just eating up the attention. Boris was my special buddy though, we formed a real connection. He likes leaning on things (I was told) and I like cuddles. He gave me kisses without slobbering all over me. Basically, he’s the perfect boyfriend.

Now it’s time for survey results… Of the officers I interacted with this week a sort of group answer was reached. The closest movies and tv have come to the reality of law enforcement is Southland and Cops. Both answers I have heard before. Hmm… 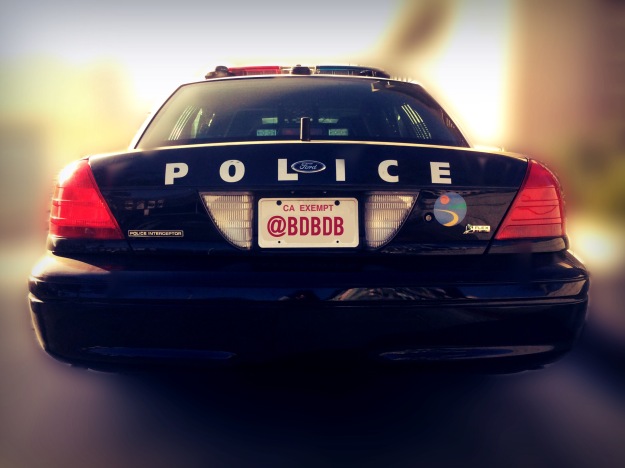 I gave myself a patrol car. Sorta.

Next up was Forensics. It’s exactly what you think it is, but maybe not in the way you think. I was told that CSI comes pretty close to reality, except one person doesn’t do everything, and things happen a lot slower than on TV.

We were taken to the forensics lab where there was no photography, but a whole lot of really cool stuff. We were shown examples of different things but here’s where things took a bit of a turn (dun dun dun!) It was already a bad pain day for me, but this is when my asshole of a right arm decided to stop cooperating. A working forensics lab is a very bad place for someone who cant control her arm so I just kind of loitered around outside the door and snooped in their closet. (Male and female mannequins and a box labelled ‘Halloween decorations.’ So a pretty typical work closet.)

Instead of a palm tree pic, we are going to end this week’s post a little differently. Go ahead and read the text in the photo below…

If you are anywhere near Santa Monica on Wednesday, April 12th between 10am and 2pm please consider stopping by to join the registry. They’ll give you free ice cream, and you could help save someone’s life. If you’re not free that day or if you live nowhere near Santa Monica, you can go here to look up times/places that work for you, or just register online. If medical stuff is “icky” or you just prefer to show your support with your wallet, that’s okay too. Click anywhere on the image above and you’ll be taken to Maria’s GoFundMe page. Please also consider posting on social media. This isn’t something overwhelming like ending world hunger, all it takes is one person, a match, seeing this information. I posted on Facebook here and Twitter here if you want to share/retweet my post. It’s so easy, and it could save someone’s life.

I promise more pictures of palm trees next week, because I just cant let go of a running joke…