Week 5 – “Treat Everybody with Dignity and Respect, But Always Have A Way to Kill Them”
— Captain Lowe

That quote was a little scary, so here’s his photo. Look at that smile! (Feel better now?)

Photo credit: no clue, not me

This week’s first topic was “Rules of Arrest” which we’ll get to in a minute. First I want to (re)introduce you to Captain Lowe. He oversees the Operations Division and the class met him at the first session, but I didn’t realize at the time that he has his Master’s in “the Zombie Apocalypse.” To be honest, I didn’t even know that was a thing you could get a Master’s in and I now immediately regret every life decision I’ve ever made.

It sounds like I’m pulling your leg, doesn’t it? Not really. Captain Lowe has his Master’s in “Emergency Services Administration” which I’m sure is just what it sounds like, and I will now refuse to call anything other than “Zombie Apocalypse Management” because that’s just who I am. ( ¯\_(ツ)_/¯ ) It’s probably disaster management & logistics, the science of effective allocation of resources when your ‘resources’ are in flux or just next to nothing, the psychology of dealing with a traumatized population, that kind of thing. (I could google it and find out I’m sure, but I’ll just make myself sad if I’m wrong and it has nothing to do with zombies after all.) In Santa Monica that’s probably regional stuff like earthquakes along with more general disasters like fire or flood, and major outbreaks of disease. Like what to do in the case of an illness spreading throughout the population so quickly and dramatically that people are just sort of wandering around looking for help, too sick and confused to really know what they are doing, until they finally collapse in the streets. You know, a zombie apocalypse!!!

I have so many questions, I don’t even know where to start. Do people have doctorates in this, is that even a thing? (Would they accept a zombie themed dissertation if the work was solid, just presented in a silly way?) How much of what Captain Lowe learned getting his Master’s applies to day-to-day law enforcement, or is it things that only apply in huge disasters? Was this a particular area he’d always been interested in? Why or why not? Does it make it impossible to enjoy ‘disaster’ movies now, or are they more fun? What do I do in the event of a west coast based Sharknado? (Do you think I’m kidding???)

Captain Lowe briefly went over his background with the Santa Monica Police Department (24 years!) which only made me want to ask him a million more questions… How is one assignment different from another one? (And different from the next, and the next…) Which one surprised him the most? Which one did he like the most? Does he ever miss any of them, or is he very happy being a big shot Captain and doing Captain-y things? And what are those Captain-y things like anyway? Is it mostly meetings in conference rooms and internal politics at that level? What is his day to day job actually like? Forget a “ride along” with a patrol officer, I want a “ride along” with Captain Lowe!

In a previous class we’d gotten to speak to someone who also had a long career in law enforcement, but his was at a number of different agencies. That’s where all that stuff I learned about SMPD vs LAPD tactics came from. It wasn’t part of the curriculum necessarily, but it made the class better just being able to chat about that officer’s history and experiences. I bet just casually chatting with Captain Lowe about his 24 years with the SMPD would have been similarly fascinating, teaching me things I’d never even think to ask about.

I was too busy writing down questions I wanted to ask to catch it exactly, but Captain Lowe said something about teaching at Ventura College and my ears perked right up. Ah VC, the site of many of my victories and even more of my defeats… 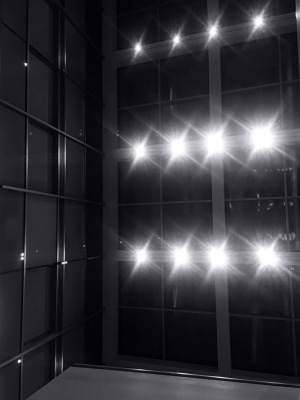 We jumped right in to the presentation on “Rules of Arrest” which is something I knew nothing about. (The only thing I was taught about this as a kid was ‘if you do something bad, the police will come and arrest you’ so the only “rule” about arrest I know is ‘don’t do bad things.’) Oh sure, I know all the phrases from TV, but knowing what they actually mean in a legal sense is totally different.

Looking down in to the foyer of the building

One of the pieces of beautiful art we walked past 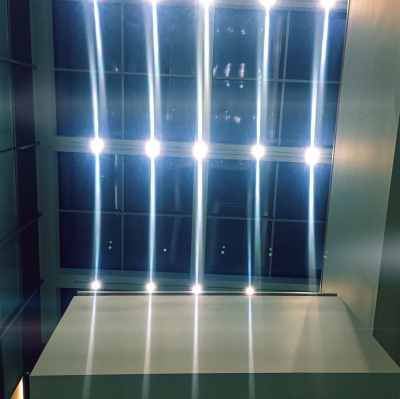 There was SO MUCH to cover and not enough time with Captain Lowe so I was only able to ask one question. As much as I was dying to ask the zombie question, (see what I did there?) I continued with my survey. According to Captain Lowe the closest entertainment media has gotten to accurately portraying the reality of law enforcement is ‘The Wire,’ which I have never seen but have always heard is amazing.

“I am releasing a list of people who have annoyed me this week. Further names will be released as they become available. No questions at this time.” 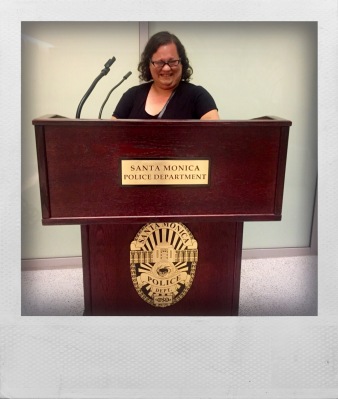 Even I can’t take myself seriously

Next up was “Public Safety Communications” which is a fancy way of saying 911. (AKA those people you never think about until you need them, but when you need them boy are you glad they’re there!) This part of class was taught by 2 people, but if I follow my personal rule about only naming names of people who are specifically named on their department’s website that means I’m going to introduce you to one and not the other. Which is really odd… Don’t read into this okay? Both of our ‘teachers’ were wonderful, clearly loved their jobs, and full of fascinating info to share. 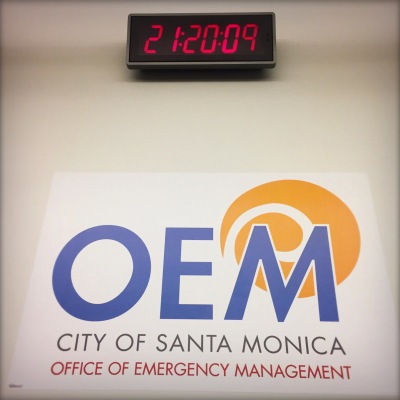 911 is part of the Office of Emergency Management. Christopher Herren is the Communications Administrator. 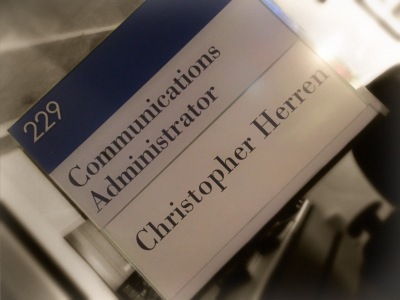 I like neatly labeled things, be they office supplies or offices.

Under Christopher Herren are 1 staff assistant, 5 dispatch supervisors, and 24 dispatchers. They handle all dispatch for the Police Department, Traffic Services, Animal Control, the Jail, the Fire Department, and Emergency Medical Dispatch. If the system were to go down for some reason there is a switch that reroutes all calls to the UCLA Police Department. (I really wanted to ask about this switch. Is it on the wall somewhere or behind a bunch of locks? Can anyone ‘flip the switch’ so it gets flipped as soon as possible after the system goes down or is it more like a nuclear launch where people with keys and secret codes are involved?)

UPDATE: Christopher Herren is awesome, and answered me on twitter

@bdbdb There’s literally a toggle switch on one of the consoles to reroute 911 calls in an emergency.

@bdbdb Don't jinx us! It's set up so that you would know if you triggered it and could flip it back if accidentally engaged.

Arclight has nothing to do with 911, they’re just visible through the window

This is the actual dispatch center. Yes, that is Lethal Weapon on the TV. No, it doesn’t mean anything, it was random. Yes, it amused me way more than it should have. The display thingie by the ceiling (its official name, probably) is similar to what we had in the call center I worked in a bajillion years ago, but instead of people calling to complain about billing, this is 911, people’s calls are actually urgent. The letters and numbers show everyone what’s going on in a general way. I mean info like how many operators are available, how many 911 calls are holding (if it’s busy) and for how long, etc. The bottom row (where it says “ADM”) is the same info but for administrative calls. One side is for Police Department, the other for Fire Department. (I think. This part is all from memory.) The actual dispatchers sit in desks with screens all around. The first thing I thought of when we saw the room was the Mission Control Center at JSC. 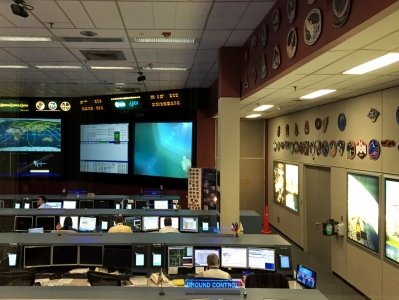 Did anyone doubt I’d find a way to work NASA in here eventually?

The dispatchers don’t all face the same way and there aren’t any ginormous screens at the front displaying the International Space Station (shame, that) but each dispatcher has multiple screens at their workstation similar to the MCC. From what I could see of their screens these dispatchers are probably the world’s most highly trained professional multi-taskers.

Two different 911 calls were played for us as examples. The first was from a more rural area where encounters with bears aren’t unheard of, so when the caller reported a bear had broken into her car and had gotten him/herself stuck inside, the dispatcher was ready with questions to make sure no one was in immediate danger. (They weren’t, although the bear would probably disagree.) The dispatcher moved on to collecting information for the responding officers which is when it got um… interesting. When the caller told the dispatcher that the car was a Prius the dispatcher couldn’t help but laugh. If it was me I’d have been rolling on the floor clutching my sides, but this dispatcher was a professional and after a split second of laughter was back to collecting info. It was just such a human, relatable moment.

The second call we heard was the polar opposite. What sounded like a young man called 911 to tell them he’d just shot and killed two family members. It was chilling. Once again, the dispatcher was professional, collecting information so first responders weren’t walking in blind, but she also asked if he (the caller/shooter) was okay. We didn’t hear how the call ended, but you could hear the dispatcher try to develop a rapport with the young man, no horror or judgement or sadness in her voice. Anything to help resolve the situation with no further loss of life. It’s something I wouldn’t be capable of doing no matter how much training I had. Dispatchers don’t get enough credit for what they do. 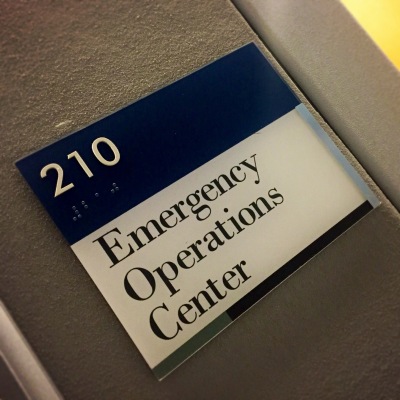 There hasn’t been a session that I didn’t enjoy, but this week’s class was particularly fun!

As always, we end with a palm tree pic.